skip to main | skip to sidebar

Well, a lot has happened in the past few weeks!!!!

Grand Mere arrived on a balmy evening in Machico, Madeira, after a taxi ride from Hell. Machico is only about 3km from the airport and I think the poor taxi driver had been waiting a few hours for what he expected was to be a 100 Euro ride so was none too pleased with a 5 euro ride to the marina…..at least he got a tip!

Machico was great. A secure anchorage, a beach for the Boys and a local Bar / Restaurant so it had all the ingredients for a peaceful acclimatisation. We spent a day or two there and then headed off to Funchal for a day so Grand Mere could see the Capital. We had a pleasant evening then headed up to Porto Calheta again to ready for the passage to Lanzarote.

The Weather looked set for light winds over the left shoulder so we fuelled up, set sail and cruised in most pleasant weather for Graciosa, a small island at the north end of Lanzarote We left at 11.45 on 20/10 and arrived at 6.30am on 22/10, having done 300 miles in 42 hours in no more than 10 knots of breeze.

Arriving in a small anchorage we had breakfast and went ashore for some beach sports with the boys. I set off in the little boat (we nicknamed Hotel Alpha) to check out the local marina some 3 miles away. It Really wasn’t up to much and as the weather had turned with wind and rain we set off round the point to Arreciefe the capital which would put us closer to our friends who were holidaying on the island for Half Term. We all felt tired and I wanted to put the anchor down and relax after our passage from Madeira.

Arreciefe is not a good place to anchor. We tried without success to drop in the inner harbour as the wind was blowing some 25-30 knots and the anchor just dragged along the bottom, so we extracted ourselves from the mishmash of small boat and headed up to Porto des Marmoles a mile north to try and fin d some good holding. There were some 10 boats at anchor and we found a spot at the head of the basin and dropped the hook in 15 ft of water over what we thought was sand. We dropped back and held well and all felt relaxed as we were finally at anchor and sheltered from the sea and wind albeit in not such beautiful surroundings as it was quite commercial with the container wharf some 200m to our starboard.

We held well overnight and decided to head down to Puerto Calero Marina where we felt we would all be happier.

This is where our problems started!!!
The wind had eased and was blowing some 10 knots from the NE and we were set to go.

I had started the engines and we were just about to leave when an English chap of an anchored boat rowed up and started talking with us about the local area. He said the holding was good, the little beach safe to leave a dinghy and, low and behold an Ikea store just round the corner…Well that was it. We all decided a trip to Ikea was exactly what we needed so we turned off the engines and put Hotel Alpha in the water and off we went to Ikea. We found loads of stuff we didn’t really need but just couldn’t live without and after an hour and a half returned to the dinghy just after midday.

We arrived at the beach and noticed Pegasus was no longer at anchor but tied up alongside the container wharf???? 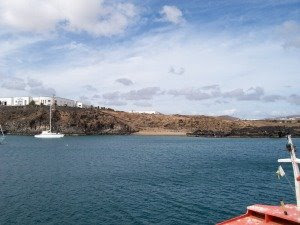 We all got into the dinghy, Grand Mere, Jean Jaques, Louis, Amanda and myself along with a few hundred euros of essentials, and headed over to Pegasus wondering what had happened. There were a few people standing on the dock and as we arrived I instantly noticed the rear boarding steps were underwater. We were ballasted down considerably in the stern.

We all got on board and as I opened the engine room hatch water was nearly over the top of the engine….quell horror!!! Inside the starboard hull, water was at mid calf level.!!

Right all hands to the pumps lets start bailing!!!

It transpired that we had dragged our anchor and hit the container wharf on the starboard transom splitting the seam where the transom meets the hull.

The wind was now blowing some 15-20 knots but was not excessive so I really didn’t understand how we had dragged.

So we were all bailing, Grand Mere with a jug, Jean-Jaques with a cup and Louis with an eggcup. I was in the engine room with a bucket and Amanda was talking in Spanish with the guys on the dock to find our what happened. A chap turned up from another boat “Peregrine” to give assistance and together we got the anchor on board.

The Tide was falling and after trying unsuccessfully to plug the hole with rags I decided that we could stabilise the situation by driving the boat onto the beach that we had used for the Dinghy and within an hour the hole would be exposed and we could review the situation.

TZZZ… something had happened. I reversed thinking we had grounded on rocks or the instruments had fused. We were being blown towards some rocks so I manoeuvred back into position and tried again.
TZZZZZ …looking up I saw the issue. The mast was trapped between two power cables. WOW. Back off quick. Reversing hard I pulled the mast free having to sacrifice all the masthead instruments to get free.

Away from the cables we dropped the anchor again, and reviewed the situation (whilst bailing). There was a boat yard we had seen in the inner harbour, which was capable of lifting us. It was decided I would go down there in the dinghy and organise a lift. After retrieving the dinghy which was full of water and our now floating Ikea essentials, I changed the fuel and sped to the boat yard, conscious that the family was left onboard a sinking boat!

I sped back and we all decided that it would be better to be at anchor off the boat yard. We started up again and motored the mile to the boat yard and picked up a buoy. I went ashore and in pigeon Spanish organised a diver with some underwater putty to stop the leak.

On my return I found that the girls had been productive. Grand Mere had noticed the boys playing with some play doe and had taken some and had success stemming the flow. Amanda decided Pleistocene would be better so when I returned the hole had been temporarily plugged with Pleistocene and no more water was coming in.

The Diver plugged the hole with epoxy mastic and I got a price for hauling out…an eye watering 4000 Euros. 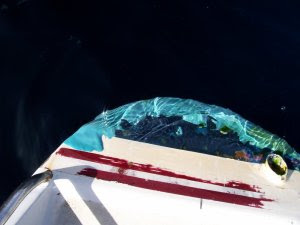 I paid the yard for the diver services happy that the situation had been stabilised and with the boat now dry we settled in for the night and decided we were all pretty lucky that no one had been hurt of that we had not had a mast fire.

I worked on the engine, and luckily the water had only kissed the bottom of the air intake so the block was dry. I changed the oil and cleaned the electrics and checked the block under telephone instruction from a mechanic in Puerto Calero called Jean Michele. That evening we got the starboard engine started and I was pretty relieved.

Our friends Pete and Debs were still in Lanzarote so we spent the weekend with them, which we all enjoyed although I could have been on better form. The Boys had great fun with their boys, Fin, Lex and Rye who are all good friends, so the boys were happy and Grand Mere enjoyed her time on the beach with the grandchildren.

We elected to go down to Pueto Calero on the Monday and see if we could get the damage fixed there. After a day or two I found the right people for the job, and organised a crane for the end of the week. Having contacted the designer Chris White I realised that we really had been incredibly lucky and that the relative minor damage that we had suffered could have been really tragic. Chris confirmed the method of lift and the some details of relaminating the mast and by the weekend we were on the hard, mast out and working hard to do as much as possible before we went back in the water. 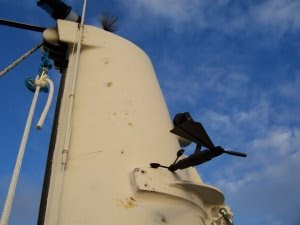 Grand Mere Amanda and the Boys spent two weeks driving around Lanzarote, swimming in the hotel pool and generally trying to amuse 2 small boys while Dad was working on the boat. Doesn’t sound too band until one mentions that it rained almost continually and the days when not raining it was only about 15-18 degrees so quite cold. Not really the holiday Grand Mere had planned on.

We changed Grand Mere’s Tickets to fly from Lanzarote on the Thursday and the following Monday (10/11) we went back into the water all mended, stickers on and looking good. 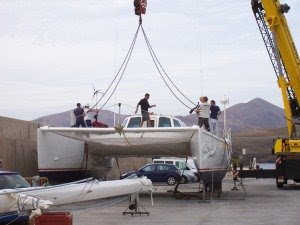 During this period I received a few e-mails from the TV production company, and realised that it really was time to make contact. I phoned Naomi and explained what had happened. It was decided that the Series producer James would come out and meet us, shoot some footage and supply some new camera equipment to make the filming a bit easier.

James and Naomi arrived on the Wednesday evening and we all sat down on the Thursday after Grand Mere had departed and discussed the turn of events. Some interviews were conducted and we took James for a sail so he could get a feel for the boat. James departed on the Wednesday having achieved his objectives and we were as a family again, which was a great relief.

It took a further 4 days to put the boat back together and we left Pueto Calero on Sunday 15th heading for Fuerteventura and beyond.

I have to say that we were extremely lucky. So many things could have gone really wrong: electrocution, mast fires, employing bad workmen, having a failure on the lift, destroying all the on board electrics, etc but it didn’t. OK we weren’t lucky to have the anchor drag, but we were with everything else that occurred or didn’t and for that we are thankful.

7500 euros later and Pegasus is now looking fine, the mast is tuned really well and the rotation is working as it should adding 2-3 knots of boat speed. She feels solid and happy.

W are all glad to be at sea again as a family. 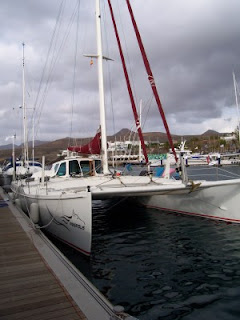