skip to main | skip to sidebar

Breakout from the Yard...A Brief History

“Things never seem to be simple and straight forward when it comes to boats and this one will probably not disappoint in that regard”…such were the opening words in the eagerly awaited e mail from designer / broker Chris White in Jan 2007.

We had been looking for a suitable boat to take the family sailing for some time. We knew the design we wanted and had a budget, however, availability was the key issue. Chris had persuaded the owner of one of his 46ft boats to consider sale, so we had to take it seriously. The Boat had been built over a 5-year period and was launched in 1997. She had sailed some 20000 miles when the owner / builder had a fatal aeroplane accident, and title had passed to his brother who had sailed her a few thousand miles and then laid her up. She had been in the yard since 2001.

After seeing a number of photos I went to New Hampshire to view the boat and see what equipment went with her as she was in quite a state. The Engines were 100 miles from the boat, the instruments had been taken out, deck hardware was missing, hatches needed refixing, the water heater was past repair and plumbing and electrical systems needed serious attention. In addition the boat and mast needed painting: a considerable job on a 46ft catamaran.

Returning to England I really thought it was too much of a project, too far from home, with too much risk. Perfect, right up our street.

We discussed it for several weeks and then in consultation with Chris White worked out a basic scheme and time frame to get the boat out of the yard and south before the snow set in. We would have the yard in New Hampshire get the boat ready for sea, and the skilled boat builder in the Chesapeake do some woodwork repairs, system installations and some custom modifications to help us while cruising.

We made an offer and accepted the counter and in early October I went back to new Hampshire to accept the boat and inventory and commission the yard to install the new engines and ready the boat for a 650mile delivery south. I would be back in 2 weeks.

Driving back to the airport the “two happiest days” adage came into mind and I wondered why I didn’t feel happy: in fact nervous and apprehensive were more descriptive.

November 3rd found me driving back to the boat wondering just how much the yard had achieved in my absence. The plan had been to have 3 days ashore then launch the boat. It was apparent fairly early on that I would need more time ashore. Working hard we managed to get the boat ready and finally the hulls touched the water on 12th November. My Father in law arrived and we spent the week preparing the boat further and after sea trials on 16th moved the boat past the fixed bridges to another yard to have the mast stepped. We had arranged for the mast to be delivered to the new yard by low loader together with the boom and headsail furling gear, and over the weekend prepared the rig for stepping. Saturday saw our 3rd crew member, Steve, arrive, and after victualing the boat and disposing of the hire car all we needed was the rig stepped, sails bent on and we were ready to go.

Monday saw an efficient team step the mast and after a few hours of work we were ready.

I paid the yard bill and checked the weather and at 1600 19/11 we slipped lines heading for Norfolk Virginia via NewYork city.

We had been really lucky with the weather and although cold, the skys had been clear. The past weekend had been windy and with the front passing on Sunday we had wind from the north West at 15-20kts. Perfect for shakedown. We were making good progress and decided to push on to the Cape Cod Canal. We arrived at the entrance at 4am within an hour of the tide change in our favour…great, lets push on.

The early hours saw calm conditions and we motored through Buzzards Bay at dawn past Cuttyhunk and Block island and approached the Race and entrance to Long Island Sound at 1600 20/11. The Weather had turned overcast and the wind had picked up from the south so we decided to head in to New haven for our first night ashore. We found a quiet berth next to a restaurant and bar, and although we were too late for the restaurant we had a few drinks and a good nights sleep after our first 250 miles offshore.


The following day we had planned to see William Robins (Winkie) in Stamford so only had a short hop down the coast, some 40 miles. We refreshed ourselves and the boat and headed off arriving at about 1600 on 21/11. Winkie was there to meet us and informed us that he had been left in charge of the marina so we could tie up where we liked. We quickly secured the boat and debunked via West Marine and the supermarket to Brennans in Stamford. Over cocktails and dinner we went through the charts for our trip down the coast to Norflok and further to the Bahamas. A trip Winkie had done with Richard Scott Hughes in his gamefishing boat “Bounty Hunter”.

On Thursday morning we slipped lines before dawn to head down the sound and catch the tide for the trip down the East river through New York. Thanksgiving day was magnificent with clear blue sky’s and not a breath of wind. We motored through New York with the tide under amazed at our proximity to the city. By 9.30am we were opposite the United Nations building and by 10.30 we had passed the statue of Liberty and Ellis island and were under the Verrazano Bridge heading for sandy hook and the Atlantic. New York had been spectacular.


The wind was now picking up and we had a front approaching which meant that the wind was from the South at 18-29Kts and it was pretty much on the nose with a 5 short swell. It was unpleasant, but we knew it was just a matter of time until the front passed and the wind would clock to North West and we would be on our way. We decided to put into Manesquan, some 70 miles from New York. We arrived at 16.45 and surfed through the entrance on the incoming swell. We found a berth on the fuel dock and tied up for the night. After tidying up we found a friendly restaurant and had dinner, a few drinks and an early night ready for a fresh breeze and a fast run the following day.

We slipped lines at 6am and set out in the lea of the land with 25-30 Kts from the North West. 2 reefs in and half Genoa and we were cruising, making some 10-16kts of boat speed, autopilot on and very comfortable. The conditions became more uncomfortable as we crossed the entrance to the Delaware, and we all agreed that we should push on with the offshore route rather than go into the wind up to the Delaware Chesapeake canal which had been our original plan.

We continued to make fast progress and as soon as we had cleared the Delaware entrance the seas moderated and fully committed we headed on to Norfolk Virginia.

At dawn on 24/11 we arrived at the Bridge Tunnel Bridge marking the entrance to the Chesapeake bay having covered 220 miles in 24hours. We found a berth at Cobbs Marina and Steve made his way to the airport for his return to the UK.

We had planned to arrive at the yard in Mobjack Bay on Monday, so on Sunday we sailed up the Chesapeake and spent a peaceful evening at anchor.
I had vaguely arranged with a boat builder that I would arrive at his yard sometime around the 26th . Having been so late leaving New Hampshire I was unsure if we would make it, but was pleased we had. We spent the next 2 days going through the work list and budget and left Pegasus in good hands on 28/11 with a return date set for early February 2008.
Posted by Pegasus at 14:25 No comments:

We are a family of four about to go sailing for a while. We have bought the boat we wanted, have had modifications done and have been on board since the end of February 2008.

We spent the winter getting used to the boat and cruised the Bahamas. We left in June 08 and arrived back in the UK July 1st and have since been in our home port of Cowes.

Having done a major refit we are now ready to depart and plan to leave on Sunday 21st September heading South possibly to Camaret (N France), Bayona (N Spain) or Madera, depending on our Weather Window.....beware the Biscay....
Posted by Pegasus at 14:19 No comments: 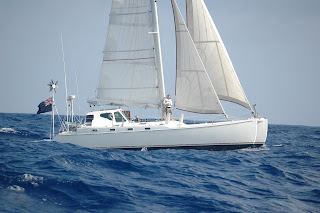